We’ve learned a lot over the past few years at Tngnt Ski Bikes.  When we launched the Tngnt Carve in 2016 (now affectionately known as the Carve 1), we were focused on getting a product on the market that would revolutionize the sport of ski biking.  We were focused on providing a high value, all-mountain ski bike.  The Carve was all that, and more.  However, the first generation Carve had its fair share of “opportunities for improvement.”  Today we will continue to explore the improvements made with the Carve 2.  We hope that you’ll learn something that will help you enjoy the sport of ski biking just a little bit more.

Before we get into Carve suspension, you may want to read up on the terminology and methodology of suspension kinematics.  There is an excellent blog post from Santa Cruz Bicycles that can be accessed here. 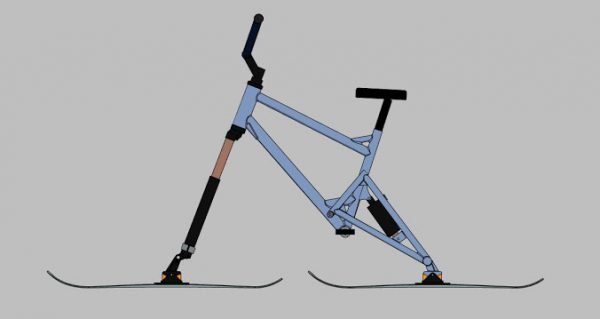 As we got more time on the bike, we noticed that the suspension seemed stiffer at the beginning of the travel and less stiff toward the end of the travel…sometimes bottoming out under big hits.  Once the shock rate curve was calculated, it became apparent why.  Looking at the shock rate curve, the first thing you notice is that the shock rate is about .42 at the beginning of the travel.  This means that at the beginning of the travel, the leverage ratio is less than 2.5 (1/.4=2.5), or quite a bit less than the average of 3.  A low leverage ratio means that the suspension feels stiff.  It feels stiff because the effective lever arm is short.  You might visualize it this way: you’re trying to get a rock out of the ground with a shovel.  You get more leverage when you lever against the rock from the end of the shovel rather than halfway up the shovel.  If you try and get the rock out of the ground just levering halfway up the shovel handle, then it requires much more effort – the shovel feels stiff and requires much more effort than levering from the end of the shovel. 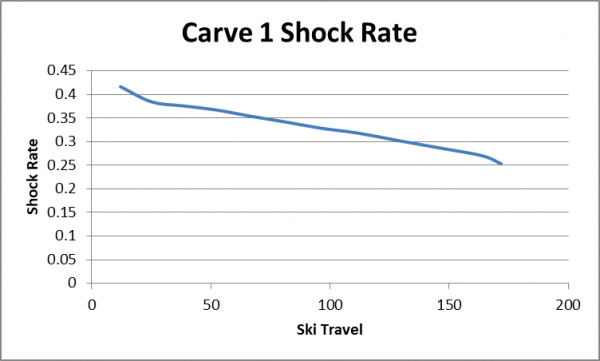 Now take note of the other end of the shock rate curve.  At the very end of the curve, the shock rate is about .25.  So at the end of the travel, the leverage is more than 4 (1/.25=4).  What does this mean?  Over the course of the 170mm of travel, the leverage ratio has increased from less than 2.5 to 4, an increase of nearly 60%!  But what does that mean in real suspension performance?  What it means is this: with a high leverage ratio at the beginning of the travel, the suspension feels stiff.  As you work your way through the suspension, the stiffness falls off at the end…possibly resulting in the suspension bottoming out at the end of the travel.  This would be considered a highly regressive design and not necessarily good.  A slightly regressive design can be acceptable, especially when a progressive air shock is used to counteract the regressive behavior.  But that is not an option a lot of the time since ski bikes are used in cold temperatures where coil shocks tend to work best in cold temperatures.  A neutral design (which is the best you can get with a single pivot) is what is needed. 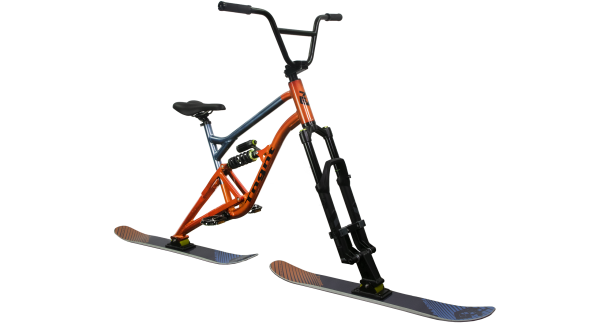 Improving suspension performance was a key focus of the Carve 2.  As part of the redesign, we benchmarked other single pivot ski bike and mountain bike designs.  One of the best we looked at was the Santa Cruz Heckler single pivot design mountain bike.  Notice that the Heckler starts about the same shock rate as the Carve 1, about .43 (or a leverage ratio of about 2.33).  By the end of the travel, the shock rate is about .33, or a leverage ratio of about 3.  Put another way, the leverage ratio increases only 21% over the course of the travel compared to 60% for the Carve 1.  So our target was set: shoot for no more than a 21% increase in leverage ratio (or maybe even do better). 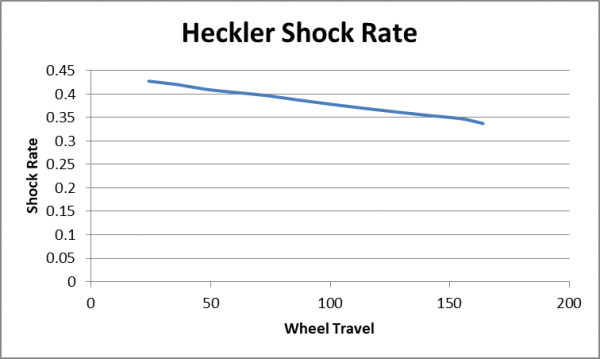 The design was laid out virtually using computer-aided design software.  After many many iterations, the Carve 2 that we know and love today resulted.  Let’s look at the resulting shock rate curve. 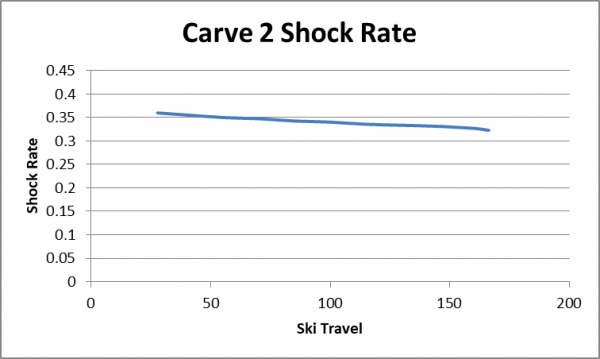 The first thing you’ll notice is that the initial shock rate is about .35, or an initial leverage ratio of 2.78.  Next, note that the shock rate only falls off to about .32 (almost the same endpoint as the Heckler), or a leverage ratio of about 3.10.  What does this mean?  First of all, with the low initial leverage ratio, the beginning of the travel is softened up.  This results in great small bump compliance in the rear end and allows for a minimal 25% sag.  What about at the end of travel?  We were looking to match the .33 shock rate in the Heckler…and we did.  This means that as you reach the end of the travel, the leverage is as high as it can be and the shock doesn’t bottom out – a good thing. 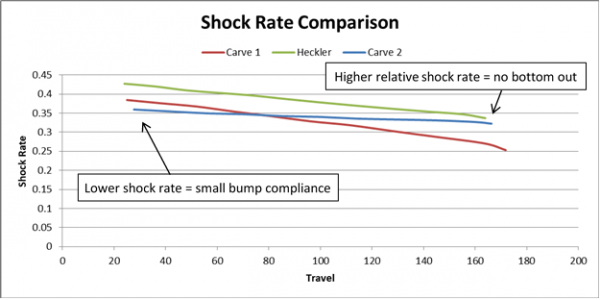 The Crave 2.0 was designed to have a more progressive shock rate, improving the overall feel of the bike. This means it feels more supportive over rough terrain and has a more consistent feel throughout the stroke of the shock. We believe that constantly evolving and improving our designs creates a better experience for the customer and a more reliable, capable ski bike.